A thriving oceans sector and economic growth in the country and the continent: discussing strategy, opportunities and skills. 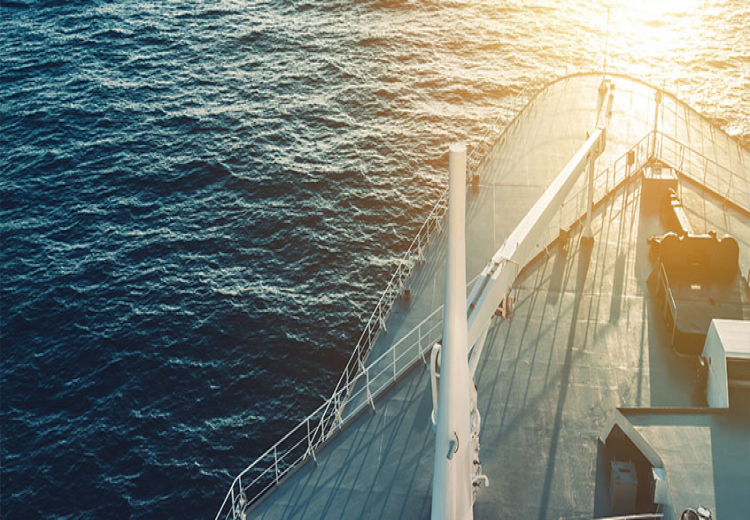 Most would agree that this is the best time that the oceans economy should rise to its expectation to contribute to the projected R177 billion to the GDP by 2033 and between 800 000 and 1 million direct jobs in South Africa.  The rise of unemployment, inequality and low economic growth worsened by the COVID19 pandemic, had speakers at the SAIMI hosted webinar on oceans economic growth calling on various stakeholders to seize the opportunities through new enabling policies to achieve sustainable development and maritime economic growth.

SAIMI’s advocacy role, enabled six distinguished professionals within the country and from across the international spectrum to discuss strategy, opportunities and the skills need for the maritime sector under the theme ‘A thriving oceans sector and economic growth in the country and the continent’. The webinar was hosted on the 8th of June 2021 with over 100 delegates joining onto the zoom platform and some streaming on facebook and youtube. The event was successfully attended indicating the significance of the conversation of driving the oceans economy.

i. The contribution of the Oceans Economy to the Economic Reconstruction and Recovery Plan.

iii. Skills for the future, innovation and development for Africa.

Prof Ncwadi a scholar from the Nelson Mandela University sparked the beginning of the conversation highlighting the implications of South African Economic Reconstruction and Recovery Plan that is aimed at stimulating equitable and inclusive growth. Whilst acknowledging the impact of degenerate growth imposed by the COVID19 pandemic, he exuded hope in reconstruction of the South African economy with the oceans as one key driver.  He recommended the focus within oceans economy was to maximise benefits from resources that come from the ocean, through addressing the critical questions, that is; what interventions we need in this economy and the type of investments we need to recover the economy ranging from infrastructure development and sector specific interventions. He highlighted that globally the oceans economy generates approximately $2.5 trillion per year from the commercial fishing and aquaculture, shipping, tourism and other activities; therefore, as a country and continent we need to share in a bigger proportion of the income generation, through strategic thinking and planning.

In response, Mr Patrick Kamerman from Damen shipyards provided an industry perspective indicating that there are opportunities to be exploited within the country which could have huge impact on job creation and the economy.  Key amongst these being the importance of attracting more business into our shores, including a cohesive marketing strategy to bring more ships into the country. He indicated that lessons that can be learnt from different countries that are booming in shipping is the active participation of private companies in operating the ports and water spaces as opposed to government maximum control as is the case in South Africa. In his perspective the advantage is that private companies create the business which is the driver for industry.

Prof Ncwadi and Mr Kamerman both identified the need for investment of infrastructure and more directly as indicated by Mr Kamerman the privatisation of new ports and creating their own ship repair facilities.

Interesting takeaways from the first session had attendees ask critical questions important for reflection which include:

- How transformed is the shipbuilding and repairs and if not transformed enough, what needs to be done in making sure that the transformation agenda is achieved?

- Is it possible to privatise the national ports for ship repairs services such that private companies have total authority on the day to day activities and operations? If so how do you ensure that the industry is not monopolised and how do you ensure that the benefits from the industry benefit the population at large not only a few business owners?

- Secondly whilst initiatives are being created and policy being driven what is the role of gender participation in the recovery process?

The valid inputs from the attendees were agreed to be of value to address through further engagements in supporting the implementation strategies to strengthen industry participation and support.

In carrying the conversation forward, Ms Trudi Hartzenberg from tralac, presented on the newly ratified agreement establishing the African Continental Free Trade Agreement (AfCFTA) and how the oceans economy fits into it.  AfCFTA is an ambitious undertaking that aims to eventually bring together 55 African countries with a combined 1.3 billion people to create the world’s largest free trade area. Three phases were identified in establishing the AfCFTA as illustrated in the figure below. The phases indicate the process upon which negotiations will take place to build a sustainable African trade zone for Africans by Africans. Realisation and timeframes of the phases have, however, not been clarified. Nonetheless Ms Hartzenberg, was confident that the agreement has its merits that will undoubtedly benefit the oceans sector.

Whilst the agreement refers to trade in general, it is the position of institutions within specific sectors to define opportunities for the oceans economy within the policy implications. Ms Hartzenberg highlighted the potential of sectors that include marine fishing and aquaculture, marine and sea-bed mining, marine transport and manufacturing, and Coastal and Marine Tourism (without neglecting the impact of COVID on Tourism). However, within the agreement itself the oceans economy has not enjoyed priority as it should and there is urgent need to find entry points for the oceans economy through the negotiation agenda. The importance of unity and synergy during the AfCFTA process was also emphasised, as well as the importance of working through the challenges and focusing on the benefits brought about by AfCTA. In response to the presentation, Ms Funmi Folorunso in her capacity as AfCTA Co-Champion for Transportation Sector at National Action Committee, emphasised that when we begin our discussions on implementations or trade regulations, maritime transport should be the first on the agenda to navigate issues of tariffs and cooperation amongst member states.

It was notable that the issue of gender participation resurfaced from other attendees, as mentioned within AfCFTA as protocol on women, Youth and SME’s. Attendees needed to know if there was a timeframe to the inclusion of Women, and youth-owned Sme's protocols in the AfCFTA, to which no one could indicate time frames, which was a concern.

The last discussion focused on implications of planning and driving oceans economy based on the skills and capacity building as well as research and innovation. Prof Nakazawa from the International Association of Maritime Universities (IAMU) focused on the role of seafarers as key workers for the maritime sector and the strategy to train qualified seafarers. He emphasised the importance of seafarers as he referred to a resolution by the United Nations General assembly that acknowledges that shipping has continued to transport more that 80% of the world trade which is essential to the normal functioning of societies across the globe.

“Seafarer’s are not only keyworkers but also contributors to the sustainable development of world trade and national maritime industries in the world.” Prof Nakazawa.

The conversation also reflected on the strategy that is being utilised to train qualified seafarers based on the Japanese framework. The framework is however, supported by a highly qualified and experienced teaching staff, adequate facilities and availability of registered vessels to offer training within Japan as an example. However, he acknowledged that the case is different for maritime developed countries due to limited number of qualified staff, as most Maritime Education and Training (MET) instructors have retired without transferring their knowledge and experience to their successors in their countries. Prof Nakazawa proposed that South Africa would need to explore more quality MET beyond the STCW requirements. Secondly, he encouraged collaborative activities across Universities and research institutions and the maritime industry. Lastly, he emphasised that maritime is a global space, therefore we need to strengthen the relationship with the maritime industry at the global level.

In adding to the discussion, Prof Oscar Philander from the Cape Peninsula University of technology (CPUT), illustrated that there has been some work being done at community level to incorporate technology through training and engagement. He gave an example of the Elands Bay Fishing Community in Cederberg Municipality in the Western Cape Province of South Africa, working on repairs of a boat and other projects (see image below). He recommended that localisation of training through existing institutions was key to innovation within the sector as it also encourages community development and participation within the sector.

In conclusion, the webinar provided not only insights to the principles of two policies namely the, South African Economic Reconstruction and Recovery Plan and the African Free Continental Free Trade Area (AfCFTA), but also possible areas of intervention. The implementation of these policy instruments requires a focused approach through collaborative efforts between national government, industry and academia. The resultant effect will be cross pollination to the African continent and ultimately the international spectrum to realise a successful oceans economy. The intention is always to position South African and Africa at the epicenter of maritime. Therefore, to achieve this Mr Odwa Mtati, CEO of SAIMI closed emphasizing that we are moving towards doing the work that is required and to do so we need industry and the continents support to achieve our objectives.

Discover Your Next Big Move By "Diving In" 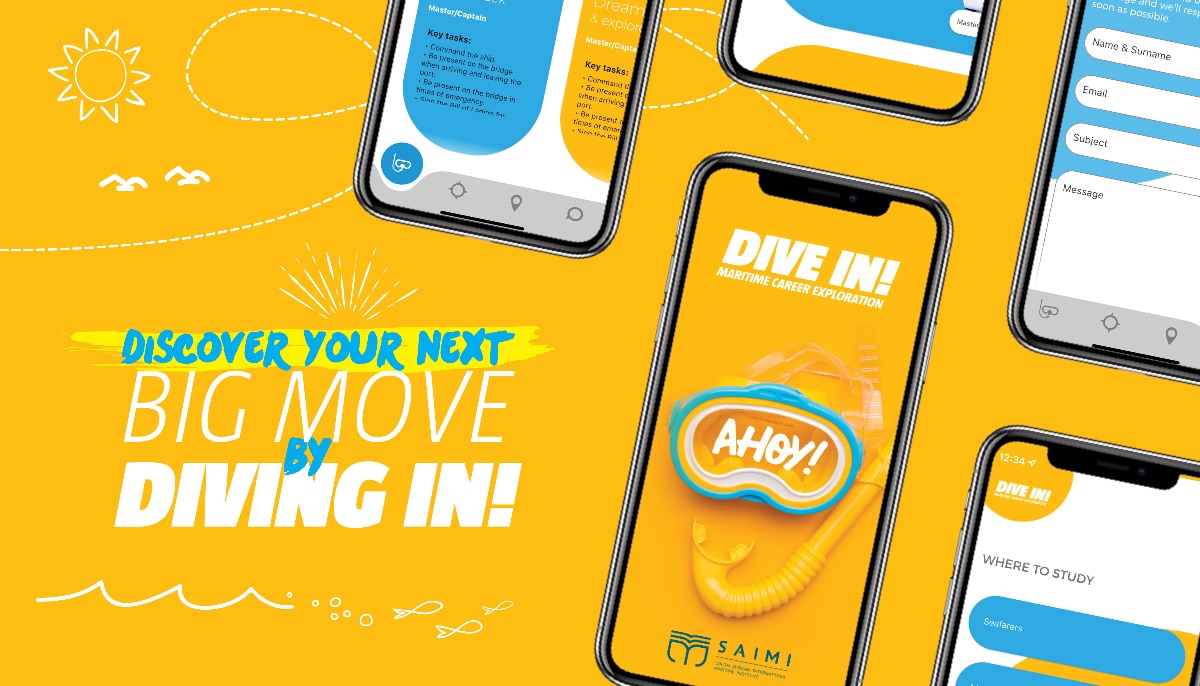 Discover Your Next Big Move By "Diving In"

A brand-new App is live and ready to connect users with a multitude of maritime career opportunities.